Where your show is the star

After your Wizard school show filming, what happens next?

So after your school show filming, what happens once our camera operator has packed away his camera?

Where do they go? What happens next? 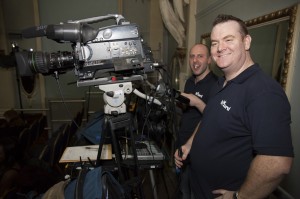 Some of the recordings are on tape, some are on tapeless storage devices. Either way the footage has to be loaded onto one of our four edit suites . Then the editor, very often the same person who made the recording, goes through the whole show adjusting the sound levels if necessary.

We also edit out any long scene change gaps or false starts so the final result will portray your show at it’s very best for you and your pupils.

Then the finished edit gets encoded for the DVD master.

By this stage it is important that we have your programme designs, cast lists and backstage credits. We used to re type them but these days most schools email cast lists within a couple of days of the show.

We design your DVD menus to match your school show theme and branding.

Each chapter point is programmed to individual items in your running order.

When the chapter points and credits have been added we make a master, adding encryption so that the final DVDs cannot be copied by other people.

All DVDs are handled very carefully by our despatch department to make sure that they leave here in a pristine condition.

Each day several despatches of eagerly awaited DVDs leave Wizard HQ on their way by next day courier to customers in towns all over the UK.

Preserve your memories for future generations - get all of those VHS tapes transferred to DVD.